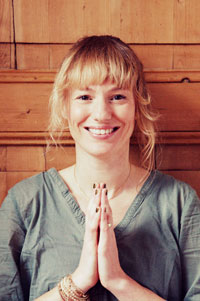 My name is Ariane den Blanken. I was born and raised in France, and moved at the age to 22 to Germany to round off my studies. I discovered yoga there, in the lovely town of Tübingen.

If I take a tree as a symbol, well rooted and reaching to the sky though the strength of its trunk, I could say that a golden leaf loosed off and laid down on my path. It was a very small glimpse of a much bigger adventure! A couple of years later, I left Germany and travelled to New Zealand, and another year later, I arrived to the Netherlands. Once I became a mother, everything got clearer. My yoga practice in my daily life became intense, it was time for me to learn how to share the joy, the doubts and the transformations of yoga with others.

I started a 4 years study in September 2011 to become a yoga teacher. I am following the classes at the Saswitha Opleiding voor Yoga en Wijsbegeerte in Bilthoven (near Utrecht). As for today, I passed the first two years, and the modules anatomy/physiology, breathing and breathing therapy and Ayurveda basics. I am now following the 3rd year classes with a lot of dedication and enthusiasm.

The teacher training I am following is recognized by the European Yoga Union (UEY, www.yogaeurop.com) and by the Yoga teacher’s union of The Netherlands (vereniging yogadocenten Nederland www.yoganederland.nl).

Thank you! Please check your email and confirm the newsletter subscription.